If you walk into almost any student band hall, you will discover that about 60 percent of the young students are playing the cornet. Many of these students will eventually move on to other instruments but will retain a love for this instrument that traces its history back to the bull’s horn.

The first horns were used by hunters to call game as the talented player could imitate many different animal sounds. As society progressed, the first metal horns were made.

About 1810, Joseph Halliday placed the first keys on these instruments. The musical scene would change quickly and just 10 years later, Jean-Hilaire Asté, usually called just Halary, invented the first cornet which he called the cornet-a-pistons.

Yellow brass with a beautiful silver lacquer thick enough to stay in place for years, a 4 13/16 bell for a mellow sound with good projection, durable Monel piston valves, and a narrow-rim Bach 6 cornet mouthpiece for comfort and flexibility. 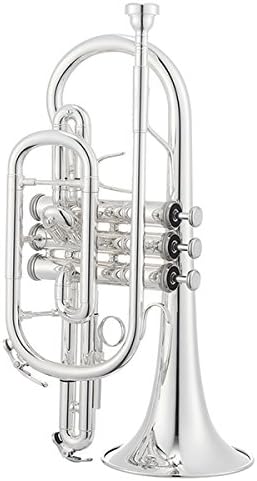 Offers a smaller bore size and a smaller bell making it easier for beginning players to master.

Twice in my life, I have been blessed to be the parent of a young cornet player. One went on to be a tuba player and one still plays the cornet for fun at camps in Texas. I have spent many hours following our local band quickly becoming the parent that the band directors trusted to work with their students. I have sat in their offices and heard them discuss instruments until I started being able to sprout it myself.

I count many band directors as friends and have learned a lot from each one. I am particularly honored to call Mike Brady my friend. His bands won 18 straight UIL marching and sight-reading superior ratings in Texas. My primary chosen instruments are the piano and the cello but through my band director friends we put together this resource for you.

It is important that players understand what makes the many choices for cornets unique to find the best one for you.

The best cornets come with monel valves. These valves are made from a mixture of nickel, copper and zinc. They are preferred because they are less likely to corrode, however, there cost can be prohibitive. At a minimum, try to find instruments that have nickel plating on the valves.

Some cornets are silver-plated providing a warmer sound to the music. Silver-plated instruments require more care as they need to be polished regularly.

Alternatively, some instruments are finished with lacquer giving the instrument a dark tone particularly in the lower registers. The color of the lacquer has no bearing on the instrument’s sound.

The bore size is measured to the thousandths of an inch. Generally, instruments with smaller bore sizes offer a brighter focused sound while offering more resistance making it easier for players to produce a solid tone. If you have a beginning student look for cornets with .453 bores.

Cornets are made of different materials and that affects the way that they sound. Yellow brass instruments that are made from 70 percent copper and 30 percent zinc produce a very bright tone.

The final common option are nickel-silver instruments made with 60 percent copper, 20 percent zinc and 20 percent nickel produce the warmest tones. Instruments that contain a lot of copper are harder to take care of because they can corrode.

While players can change the mouthpiece, many instruments come with a mouthpiece. The shallower the cup, the brighter the sound. Semi-spherical cups offer a brighter more projected sound than do conical cups.

Cornets come in two different pitches. Almost all beginning cornets are pitched to B flat. These cornets are sometimes called soprano cornets. They are the easiest to play, and they have the greatest variety of music written for them.

The other option is a E flat cornet. These cornets sound similar to a piccolo trumpet and are much harder to master.

Cornets come in many different price ranges. We have tried to include a top pick in several different ranges to allow every player to find the right one for them.

Yellow brass with a beautiful silver lacquer thick enough to stay in place for years, a 4 13/16 bell for a mellow sound with good projection, durable Monel piston valves, and a narrow-rim Bach 6 cornet mouthpiece for comfort and flexibility.

Players have trusted Bach to make outstanding instruments since 1924, and their Bach 184M certainly pays tribute to their rich heritage. This beautiful instrument is made from yellow brass for bright notes.

Bach has chosen a beautiful silver lacquer finish for this instrument that is thick enough to stay in place for years while helping this Bach cornet produce a warm sound. Players need to clean this instrument carefully as it is most prone to corrosion.

It has the traditional shepherd’s-crook design that is popular with players for its compact design. A .459 bore which is close to the middle allows players to create focused sound while providing the right amount of resistance during quick tempo pieces.

The bell on this Bach cornet measures 4 13/16 inches so players can easily create the mellow sound that the cornet is known for while projecting the music enough to be heard. Each bell is carefully hand hammered adding to this instrument’s beautiful design.

The best Monel piston valves ensures that they work properly for many years to come. This instrument is easy to tune because of the trigger slide adjustment on the first valve and the fixed ring adjustment on the third valve.

Standard with this instrument is a Bach 6 cornet mouthpiece, a great choice for classical music. The mouthpiece provides enough flexibility to make it very useful for players who have only one mouthpiece. Players find this narrow-rim mouthpiece fits the mouth quite comfortably, allowing them to keep playing for a long time.

The instrument also comes with a 1884 case containing a wooden shell that easily protects this cornet when traveling.

This is our top pick because it is a well-constructed instrument backed by a company that has years of experience, but new players may find this instrument above their playing capabilities. The gold-plated finger buttons help give this instrument a stylish look while allowing players to grip the keys firmly.

Many players love the Besson International cornet, but this instrument is no longer made. The Besson Prestige cornet has many of the same characteristics. The .468 millimeter bore makes this a responsive instrument in many environments.

The 4.88 inch gold brass bell on this well-constructed instrument allows players to be heard. The gold-plated finger buttons helps give this instrument a stylish look while allowing players to grip the keys firmly. Players can choose between a clear lacquer finish or a silver-plated finish. Several professional cornet players have chosen this instrument including Roger Webster, Harmen VanHoorne and arranger Luc Vertommen.

This instrument comes with a hardwood case that is big enough to carry accessories. Has a very flexible sound especially at the upper registers.

Developed with professor David King of Harvard Kennedy School of Music, professor Russell Gray of the Queensland Conservatorium of Music and Phillip McCann who is the former leader of the National Youth Brass Band of Great Britain, this Yamaha Neo B-Flat cornet was built to withstand the rigors of professional playing.

It has a very flexible sound especially at the upper registers. Gold brass makes for a very mellow sound. The tuning side cook and the connector tubes are also gold brass making this one of the most durable cornets on the market. First and third valve springs assist the player in keeping this instrument in perfect tune. This cornet has a 11.90 millimeter bore which is one of the largest found on cornets today. The 125.5 millimeter bell projects tones very well.

This instrument would have been our top pick except that most players will have a hard time creating a variety of different sounds on this cornet as it definitely favors the British big brass sound. While Kanstul may not be the household name like Bach, their KCR733 cornet is an exceptionally well-made instrument.

It weighs just two pounds and comes with a lyre holder making it a great choice for those in a marching band. The .470-inch bore allows players to easily play warm music that is in tune. This Kanstul cornet features a highly responsive 4.75-inch bell. The first valve thumb slide and the third valve slide allows players to easily tune this instrument. Each of the Monel pistols are carefully handcrafted helping to stop key noise and air leakage from this instrument.

Note that this instrument has a plastic third valve stop that some players report gives them a horrible racket when playing the middle C. Its tone is very bright.

Removing water from the inside of this instrument is easy because it has two water valves. This reasonably priced instrument may be the perfect step up for intermediate players, although its large bore size may make it difficult for new players to master. If you are a beginning player or the parent of one, then consider the King 605W before making any buying decision. This shepherd’s crook cornet offers the reliability of minol pistons on a budget friendly cornet assuring that the instrument spends less time in the repair shop.

The rose brass lead pipe helps to warm the sounds coming from this very responsive cornet while the rest of this lacquer-covered instrument is built from yellow brass. The .462 millimeter smaller bore size makes this instrument easy to blow for the beginning player.

This instrument has a highly functional first thumb saddle, but it lacks anyway to tune the instrument on the third valve. A 4.75 inch bell makes this instrument project perfectly in ensembles or when playing a solo.

Adding a stylish touch to this cornet are pearl keys. The combination of rose brass, gold brass and pearl creates a visually stunning instrument producing a warm tone.

A drawback of this instrument is that it comes with the King 7C mouthpiece that may be too big for young students or players with smaller mouths.

Offers a smaller bore size and a smaller bell making it easier for beginning players to master. Not so many years ago, Jupiter had a very bad reputation among professional horn players, but the company has proven that those days are behind them with the Jupiter 520S B Flat cornet.

A mid-range this instrument shines with great intonation at any volume level. Playing the top notes with forte, however, can leave a slight squeak. At the bottom of the range, this instrument really shines although some players may find the first valve trigger difficult to use.

The Jupiter offers a smaller bore size and a smaller bell making it easier for beginning players to master. This bargained-priced instrument comes with a woodshell case making it easy to transport from home to school. Successfully promoting your music is hard work, especially when you’re first starting. But... The saxophone is a beautiful and versatile instrument that is used in a wide variety of musical... Do you need the perfect baritone? Look no further than the Yamaha YBH-301S Series, which is more... It can be incredibly overwhelming to search for a new mouthpiece for your saxophone or clarinet. To... Woodwinds, as with any instrument, need proper maintenance to not only sustain a great sound but...