An autoharp is a simple instrument, shaped much like a washboard. It is a fretless, stringed instrument that has buttons that mutes all the strings that are not part of the intended chord. Chords are formed using buttons. When pressed, all strings not belonging to the chord are muted.

Other names for the autoharp:

Essentially, the player presses the chord button and strums the strings. This simplicity of it is what makes it such an easy instrument to learn to play. Anyone can learn the autoharp – if you want to start learning an instrument, it’s a good one.

The strings of the autoharp are usually strummed with a pick or the hand, but can be plucked individually if necessary.

Why is it called an autoharp?

There is some controversy over who created it first. Charles F. Zimmermann, a German immigrant in Philadelphia, was awarded a patent for a “Harp” fitted with a mechanism that muted strings selectively during play. However, Karl August Gütter of Markneukirchen, Germany, had previously built something called a Volkszither, a design which Zimmerman based later models.

The term autoharp was once a trademark of the Oscar Schmidt company, but has evolved into a generic designation for similar instruments. It is often categorized as an American instrument and is commonly used in bluegrass and folk music.

Is autoharp easy to learn?

Yes, it is easy to learn. As initially conceived, the autoharp was played with the instrument set flat on a table. The left hand works the chord buttons, while the right hand strums the strings below the chord bars. However, later performers began experimenting with taking the instrument off the table and playing it in an upright position, held in the lap.

Playing the autoharp helps the beginners and children gain strength in their hands and “anticipate” the beat when they strum the strings. It also primes your brain to do different right hand and left hand movements. It’s the perfect prep work for playing piano or other instruments.

The autoharp helps you learn to hear chord progressions as well as each part of a chord. It also allows you to have your hands doing two different things, while your eyes are looking at the chord map and reading music. It’s so fun!

How to Learn the AutoHarp As a Beginner

How much does an autoharp cost?

How much does an autoharp cost? Check on Musician's Friend Check on eBay

There is a large range of autoharps, with several chord bar setups and geometries. Some offer much more flexibility than others.

Brand new, factory-built autoharps are not necessarily the best quality. You may want to look for a dealer who restores used instruments or focuses only on professional grade autoharps.

Or you can check out some of the more popular online stores: 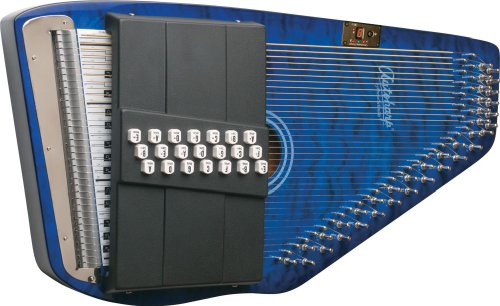 Custom or professional-grade autoharps will often have a solid bridge rod that the strings go over as they come down from the tuning pins. On most Oscar Schmidt models, the bridge rod is eliminated in favor of an individual bridge created for each string. A solid bridge provides a brighter, more intense sound.

What chords can an autoharp play?

Most modern autoharps have 36 strings, with some examples having more. They are strung as semi-chromatic but can be modified. Standard models have 12, 15 or 21 chord bars available, so they can provide a wide range. The range is determined by the number of strings and their tuning. A typical 36-string chromatic autoharp in standard tuning has a 3½ octave range, from F2 to C6. I love weird instruments, and as a result of extended study, I’ve become a multi... When you think of bagpipes, you want the best instrument out there. But unfortunately, there are no... The banjo is a popular instrument in country, folk, and bluegrass music. The first banjos were made... The guitar strings you choose will have an enormous impact on the sound quality and playability of... The ukulele is a fun instrument that has been making a comeback in recent years with many people... So, you want to learn to play the flutophone? Or was it the penny whistle, also known as the tin...